The Circle for Late Antique and Medieval Studies
presents:

Join us on 09 December at 11:00 am EST.
The event will be held virtually.
Register here for the event! 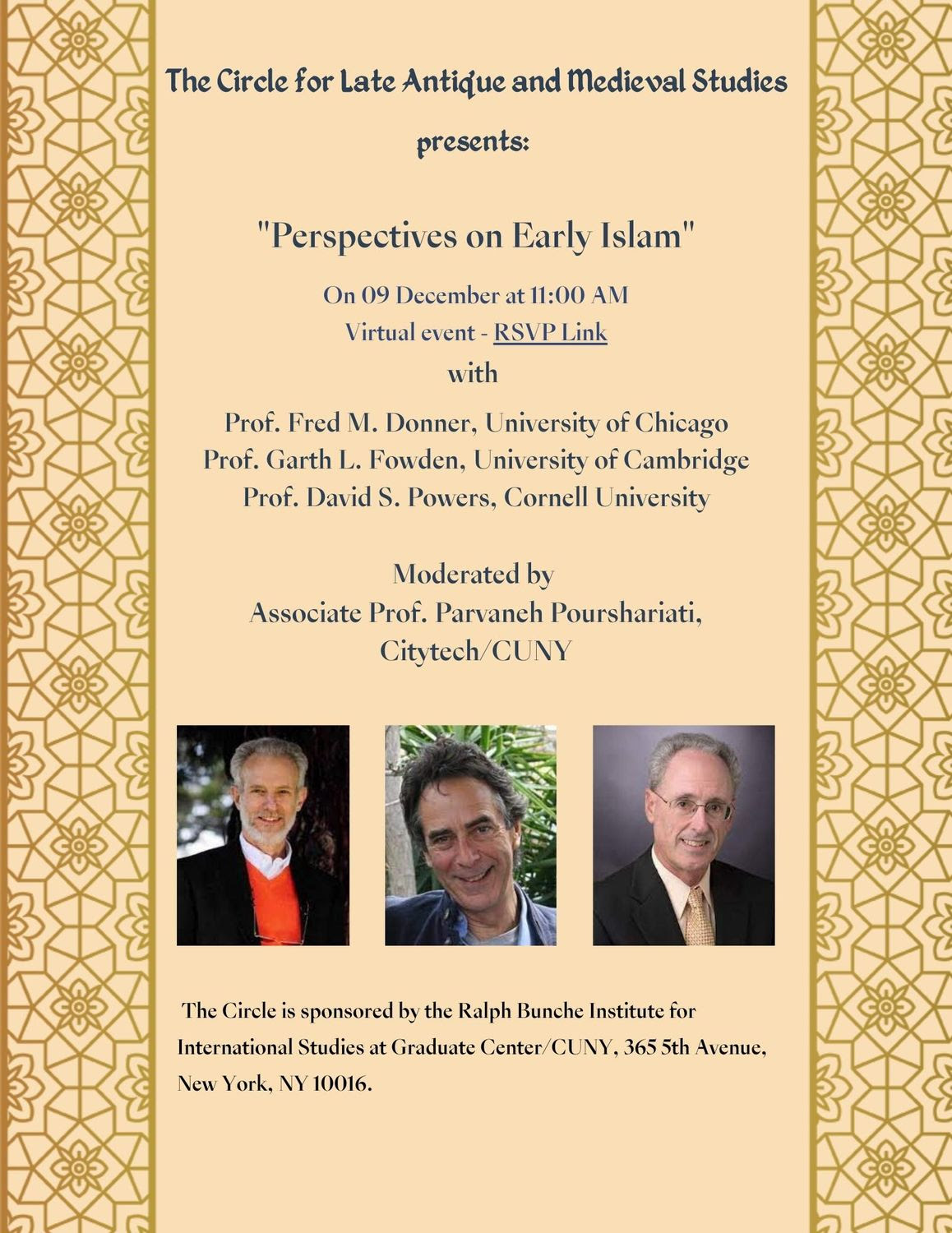 Prof. Fred M. Donner is Peter B. Ritzma Professor Emeritus of Near Eastern History at the University of Chicago. His early research focused on relations between pastoral nomads and settled society in the Near East, and over the years has shifted to Islamic historiography, Qur’anic studies, Arabic papyrology, and the origins of Islam. His major publications include The Early Islamic Conquests (Princeton University Press, 1981); Narratives of Islamic Origins: the beginnings of Islamic historical writing (Darwin Press, 1997); and Muhammad and the Believers: at the origins of Islam (Harvard University Press, 2010); he has also authored several dozen scholarly articles on early and medieval Islamic history, Qur’anic studies, etc.

Prof. Garth L. Fowden is Sultan Qaboos Professor Emeritus of Abrahamic Faiths at the University of Cambridge. In response to current debates about the nature and definition of late Antiquity, the relation of early Islam to the late antique world dominated by Iran and East Rome, and the acculturation of Muslim communities in contemporary Europe, Professor Fowden is engaged in writing a large-scale history of the Afro-Eurasian First Millennium CE. He assigns particular prominence to the development of rabbinic Judaism, patristic Christianity and early Islam, but also of other religions such as Buddhism and Manicheism. Greek philosophy and medical science, and Roman law, are integral to the project. His interpretative essay entitled Before and after Muhammad: The First Millennium refocused (2014), is designed as a prelude to Exiting Antiquity: Afro-Eurasian perspectives on the First Millennium, to be published by Allen Lane.

Prof. David S. Powers is Professor of Arabic and Islamic Studies and Adjunct Professor of Law at Cornell University. His research focuses on the rise of Islam; and the history of Islamic law and its application in Muslim societies. Powers is co-founder and Editor-in-Chief of the journal Islamic Law and Society. He is the author of Studies in Qur’an and Hadith: The Formation of the Islamic Law of Inheritance (1986); Law, Society, and Culture in the Maghrib, 1300-1500 (2002); Muhammad is Not the Father of Any of Your Men: The Making of the Last Prophet (2009); and Zayd (2014).

The Circle is convened by Parvaneh Pourshariati, Associate Professor of History at CityTech, CUNY.  The Circle for Late Antique and Medieval Studies is based at the Ralph Bunche Institute for International Studies at the Graduate Center, CUNY.

← Back
This site is part of Humanities Commons. Explore other sites on this network or register to build your own.
Terms of ServicePrivacy PolicyGuidelines for Participation